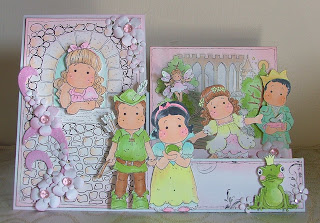 How are you? well I think I have gone a tad crazy with this one. Anyway my idea behind this one was to create a fairyland where all the characters in fairytales live....a bit like in shrek! In My head I was going to use all the characters but in reality the card was too small, so I tried to go for ones that were instantly recognisable as famous fairytale characters.

I have used some of the images that I purchased during my mad splurge at "Sir Stampalot" and some of the images were sent to me by a lovely bloggy friend! I have coloured them all with my copics...I had to hand draw in the rest of the wall. I have added a chipboard swirl, some punched flowers and bling.

The little Fairy has been attached with acetate, so she actually floats in the centre of the card.

This is my entry for:

Magnolia down under - swirly swirls (I have stamped some swirls and used a swirl chipboard piece)
Charisma cardz - Bling
Crafty Creations - Its a stitch up
Posted by Juls at 18:35

Juls
I'm 30 something and obsessed by craft! I even dream in cards! I started off by looking at cards in shops thinking I could do that and it would cost me less, then my mum baught me a load of crafting stuff and the obsession began...and it doesnt save me money but costs me a fortune! but hey I'm happy! I like all forms of papercraft and I will probably give most things a go. Now I have descoverd blogland and I'm loving that to,I really appreciate comments from fellow crafters, I have gained much inspiration from looking at cardmaking blogs, hopefully now I can give a little too...

I hope you enjoy looking at all the projects that I display on this blog, and I am happy for you to use them as inspiration and to borrow ideas. However I would ask that you not copy any of my work directly for commercial use, any contest submissions or to be put forward for publicaion. Many Thanks.

Proud to be on the DT for Digi Chooseday

So Proud to have been a DT for Sugar Nellie

So Excited to have made top 5

so Honoured to have made top 3 twice!!!

Whoo hooo..so excited to have been a winner!

I have made top 5 three times!! whoo hoo

So proud to have made the top trio 4 times!