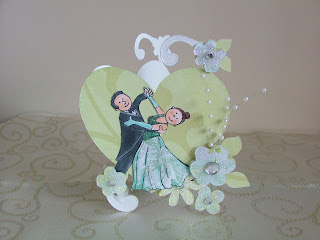 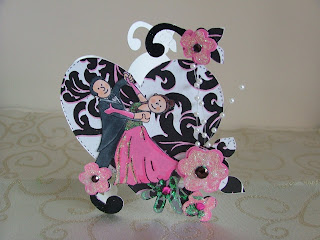 I have made both these cards as anniversary cards for friends of mine.

I have used "Sissix - Heart w/flowers & Vine" to make the card. This is one of those cards that was a great idea in my head..but then I found it difficult to execute.

The first one I made was the black and pink one. The stamp is "jollynation - ballroom couple" I have stamped it twice, one to colour and the other on fancy paper to make the skirt of her dress. The papers are "papermania - touch of pink" On the swirls I have used black glitter card...then the flowers have been blinged up and given a generous amount of stickles!

I quite liked the finished result but was not completely happy with it, I think it is just a bit too busy..so I then made the green one..using the same techniques, but the papers I have used are "K&Co wedding collection"

This is my entry for Cup Cake Crafts - Celebration
Posted by Juls at 11:51 38 comments:

There's a frog on my head!! 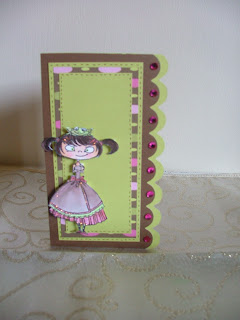 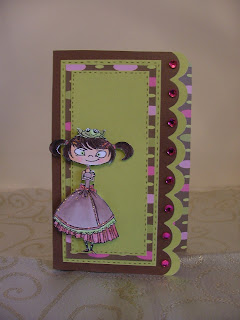 I have to say I have gone a little bit scallop mad at the moment! I was watching QVC and saw some Kanban scalloped cards they were large ones..and I loved them, I remembered though that forever ago I bought, I think its "papermania" 8"x8" scalloped card stock, which I made some cards with when I first bought it, but it has since been long forgotten!! so I hunted it out and chopped it up a bit, until I got what I was after...I have to say I did get rather carried away I think I have made about 10 cards using this style..I also have lots of lovely left over bits which I think I will emboss, and use as features on other cards...anyway here's one of them.

I have used 2 of the 8"x 8" cards to create the double scalloped edge. The gorgeous image is "Krafting Kimmie" and I have coloured her with my whispers pens and glittered up her dress with stickles (unfortunately that does not show up too well on the photo) The paper is "K&Co - Amy Butler/Solice" and for the final bit of bling I have added some Kanban Gems.

This is my entry for 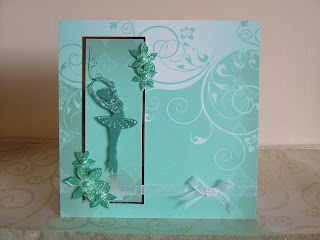 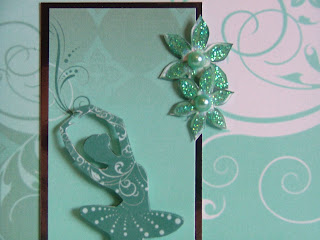 This is a first attempt at a whole card, designed from the computer..I do own a couple of crafting cd's but they have never really been my thing, I normally print out the image, and then alter in some way through a more traditional form of crafting.

I bought the " My Craft Studio - Flourish " cd, firstly because I thought some of the images were just beautiful and timeless, secondly it came with meltdust paper and powder which allows you to emboss an image that has been printed on the computer, and I defiantly wanted to try that especially as there are so many fab digital stamps out there!! I have not been brave enough to try it yet, as there was only 3 sheets of paper and vellum..so at the mo I am just playing around with the cd to see how I get on...anyway...(wow I can waffle!!)

The backing paper, image and flowers have all come with the cd..I played with the colouriser thingy to get a monochrome look..why I went with green I have no idea, It doesn't really go with the traditional idea of a ballerina! I printed out 2 of the main image so I could decoupage her...and then I have added adhesive pearls and glitter to the flowers, and finally added a touch of glitter.

This is my entry for:

Charisma Cardz - Anything but Christmas
Posted by Juls at 14:56 20 comments: 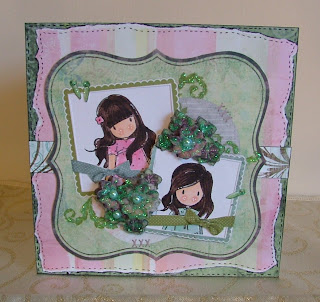 I have made this card, using a combination of Digital crafting and stamping. I feel like I cheated somewhat with this one, The main layout of the card was an image taken from "My Craft Studio - Wings and things" I fiddled with the colour a little to get this gorgeous sage green, then printed it out 4 times, and have done loads of cutting out to create the layers, I found cutting out the inside of the frames a little tricky, but hey ho I got there in the end!!

I then stamped 2 Gorjuss girls to put in the frames. The dark green background paper I created on the computer.. the pink& Green backing paper is "Sandylion - wedding stripes" and the little stripe running across the middle I think is "Bo Bunny"

Finally its been finished off with stickles and some adhesive pearls!

I made this card for a couple of challenges:

Paperplay - Movie/books ( I have gone for Sense and Sensibility, by Jane Austin)

Creative Card Crew - Anything goes
Posted by Juls at 14:01 19 comments:

Off to the Movies - Take two!

wow I can't believe that we are half way through December already!! Just a quick reminder that there are still a couple of weeks left for the challenge over at By The Cute and Girly there are 4 amazing prizes on offer, so its well worth joining in!! Unfortunately Mr Linky does seem to have gone on holiday a little early..we still really want to see your creations so if he is still not there please leave us a link in the comments!

here are a few more of the makes that I did for this challenge:

Confessions of a Shopaholic 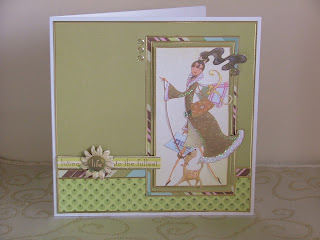 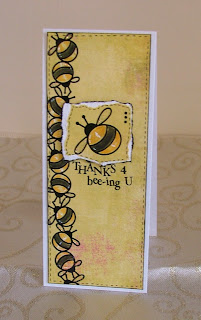 I really have become quite addicted to these little scraplings!! I really love the way this one turned out and it was just so simple the paper was from my scrap box I think it is "WAMK" The border and the main image are some peeloffs that I have had in forever and just never used, they have been coloured using my whispers pens. and the main bumble bee has been matted onto another scrap and put on 3d foam to add a little dimension.

We are really looking forward to seeing what you all come up with!!

Just as a quick P.S.. I feel like I have not posted in ages..and I have not been commenting as much..I am so sorry about that! Been having a few health issues and we also had to rush down south for a family funeral last week! hopefully I will be back on my feet soon and commenting as normal! Hugs to you all Juls
Posted by Juls at 10:15 13 comments: 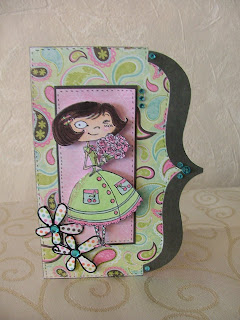 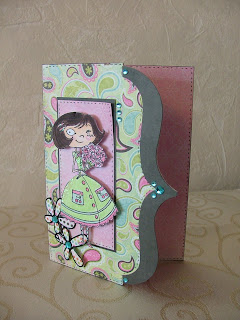 I am still really enjoying playing with my new Kraftin Kimmie stamps..there are some that have just been released that I also need!!!...

I have used the gorgeous paper from "WAMK - Tiffanys" The bracket icon thing was from some die cut sheet thing I had ages ago...It was popped out, and lying round my drawer somewhere! I cut round it to created a shaped card..added some Faux stitching and some gems..

I made this card for the Cardvarks Micro colour challenge..where there was only 24 hours to create a card..

Playing in the Sugar Bowl 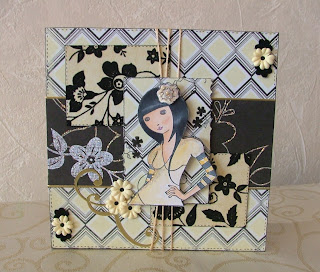 Hi..Its been ages since I have played in the sugar bowl , which is just shocking..I have wanted to, but never seamed to fit it in!

So I am delighted with myself that I have got this ready in time!! I Loved Marlene's sketch, although I did struggle with the 3 strand thing..I am still not quite convinced that I made it work!! Anyway...the added challenge was to include Zig Zag's...So I used this gorgeous paper "DCWV - Le Creme" which features this stunning zig zag design.

I Love this stamp soooo much, I can't believe that I bought this in Aug and this is the first time I have inked her up!! I stamped her onto the patterned paper, and a few times on plain card stock to add some dimension. as always everything has been finished off with a little stickles, so peel off swirls and dots! Hope you like it.

Juls
I'm 30 something and obsessed by craft! I even dream in cards! I started off by looking at cards in shops thinking I could do that and it would cost me less, then my mum baught me a load of crafting stuff and the obsession began...and it doesnt save me money but costs me a fortune! but hey I'm happy! I like all forms of papercraft and I will probably give most things a go. Now I have descoverd blogland and I'm loving that to,I really appreciate comments from fellow crafters, I have gained much inspiration from looking at cardmaking blogs, hopefully now I can give a little too...

I hope you enjoy looking at all the projects that I display on this blog, and I am happy for you to use them as inspiration and to borrow ideas. However I would ask that you not copy any of my work directly for commercial use, any contest submissions or to be put forward for publicaion. Many Thanks.

Proud to be on the DT for Digi Chooseday

So Proud to have been a DT for Sugar Nellie

So Excited to have made top 5

so Honoured to have made top 3 twice!!!

Whoo hooo..so excited to have been a winner!

I have made top 5 three times!! whoo hoo

So proud to have made the top trio 4 times!